This article offers industry insights about automation systems with a primary focus on arms and actuators. Read further to learn more about:

Chapter 1: What is an Automation System?

An automation system is an integration of sensors, controls, and actuators designed to perform a function with minimal or no human intervention. The field concerned in this subject is called Mechatronics which is an interdisciplinary branch of engineering that combines mechanical, electrical, and electronic systems.


Most automation systems are derived from manual processes such as drilling, cutting, welding, and so on. These systems use robotic arms to manipulate the movement of the tool that performs the original function. Other applications, particularly in the field of process control, use automation to monitor and control process parameters. This is done by manipulating the operation of equipment such as heaters, motors, pumps, and compressors or by opening or isolating process lines using control valves. Automation systems are available in different configurations even for one specific function. The most common applications of automation systems are:

Chapter 2: Advantages and Disadvantages of Automation

An automation system consists of a device capable of receiving input (sensor, human-machine interface, etc.), a computing system (processor), and the manipulators that perform the actual work (actuator). The most important part of the three is the computing or control system. It can be divided into two types: open loop and closed loop (feedback) control. Open-loop control is a system where the controller sends signals to the actuator to obtain the desired response. The signals sent are only governed by the program initially fed to the controller. In a closed-loop system, a feedback signal is involved. The feedback signal is generated by the sensor which measures directly or indirectly the response made by the actuator. This feedback signal is processed by the controller to compare the actual output with the desired output. The controller then makes the necessary adjustments to the signals being sent to the actuator. The loop is repeated until the correct response is attained.


The input component can be a human-machine interface or a sensor. The human-machine interface is where the human operator communicates with the controller. This is where variables or commands are entered to modify the expected output. A sensor is used to measure the output by utilizing different physical or electromagnetic characteristics such as pressure, temperature, magnetism, radiation, and so on. The measured physical property is converted into an electronic signal that can be read and used by the controller.


The actuator is the part that produces the actions. The actuator is composed of a driver and an assembly of joints and links. The driver provides the required force or torque used to move the links connected by joints. Drivers can be considered as electric, hydraulic, or pneumatic. Electric actuators are motors or solenoids that convert electrical energy into a mechanical output. Hydraulic and pneumatic systems operate using fluid pressure compressed on pistons, cylinders, vanes, or lobes. These systems, in their most basic concept, can be considered electric as well since the fluid is controlled by the opening and closing of solenoid valves.


The links can move relative to each other depending on the degree of freedom allowed by the joint. Degrees of freedom is defined as the allowed motion of the links on a three-dimensional axis. There are six degrees of freedom, three for translation (up and down, left and right, forward and backward) and three for rotation (pitch, yaw, and roll). Most joints allow only one or two degrees of freedom for simplicity since creating a highly movable arm is difficult, expensive, and impractical.


The arm is where the end-of-arm-tools are mounted. An arm is an assembly of links and joints that have a fixed range of motion. A link is typically a rigid component capable of transferring force. Links are connected by joints which are categorized as revolute or prismatic joints. Revolute joints allow rotational movement while prismatic joints allow translational movement. Combinations of these links and joints yield varying degrees of freedom or range of motion. Arm configurations can be classified as follows.

End-of-arm-tools (EOATs), also known as end effectors, is the tool or operator designed to interact with the product or process. Most EOATs are grippers that lift and drop objects used for transferring or reorienting objects. Grippers have different methods of handling objects and are classified as impactive (mechanical jaws), ingressive (needles), astrictive (vacuum and magnetism), and contigutive (adhesion). Tools can also be fitted for more specific applications such as milling and welding.

Actuators are the components that provide force or torque to create movement. These are attached to the links and joints through tendons, gears, chains, cams, or shafts to form the main actuation system. They are classified as electric, hydraulic, and pneumatic. An industrial robot is an autonomous system of sensors, controllers, and actuators that executes specific functions and operations in a manufacturing or processing line. They operate continuously through repetitive movement cycles as instructed by a set of commands called a program... Automated guided vehicles (AGV) or mobile robots are types of guided robotic systems that are not bounded by a fixed range of motion. Rather, it is self-contained and can move along a line, surface, or space... 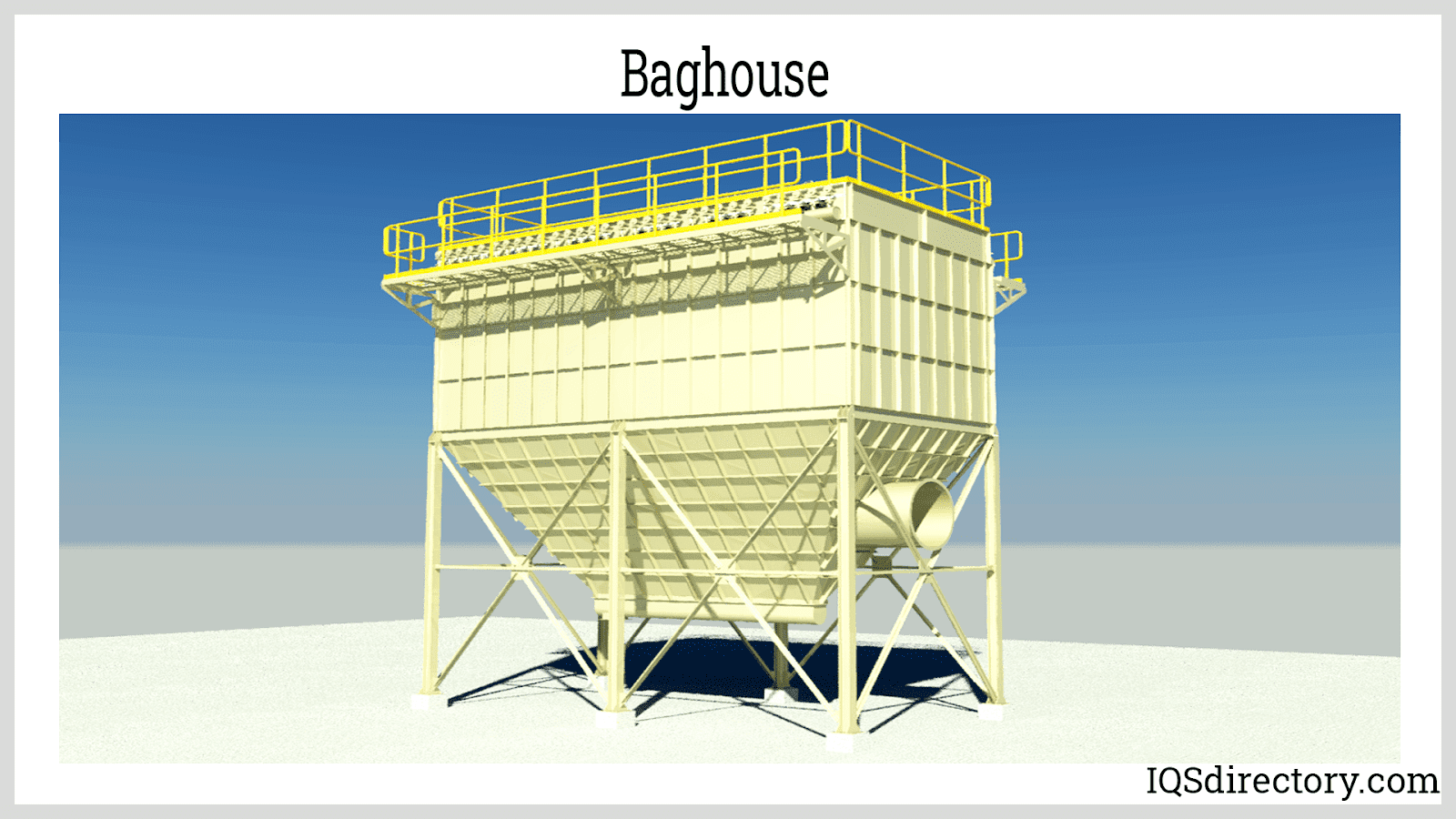 A baghouse is a pollution control device that uses tubes, envelopes, or cartridges to remove, capture, and separate dirt, particulate matter, and dust from the air of a manufacturing or processing facility. The main components of a baghouse are the media or bags used to filter the particles from the air as it passes through the system... A bowl feeder is a mechanism for supplying small parts and components to a production line or for sorting bulk items for rapid use. A self contained bowl feeder system has a bowl that sets on a spring loaded base that moves vertically... A central vacuum system is a cleaning mechanism that is built into a building for ease of use, access, and maintenance. Vacuum and pressure are created by a centrally located motor to remove dirt, dust, and debris... A dust collection system is a system that removes particulate contaminants from the air in production facilities, workshops, and industrial complexes. The system cleans air by forcing it through a series of airtight filters... 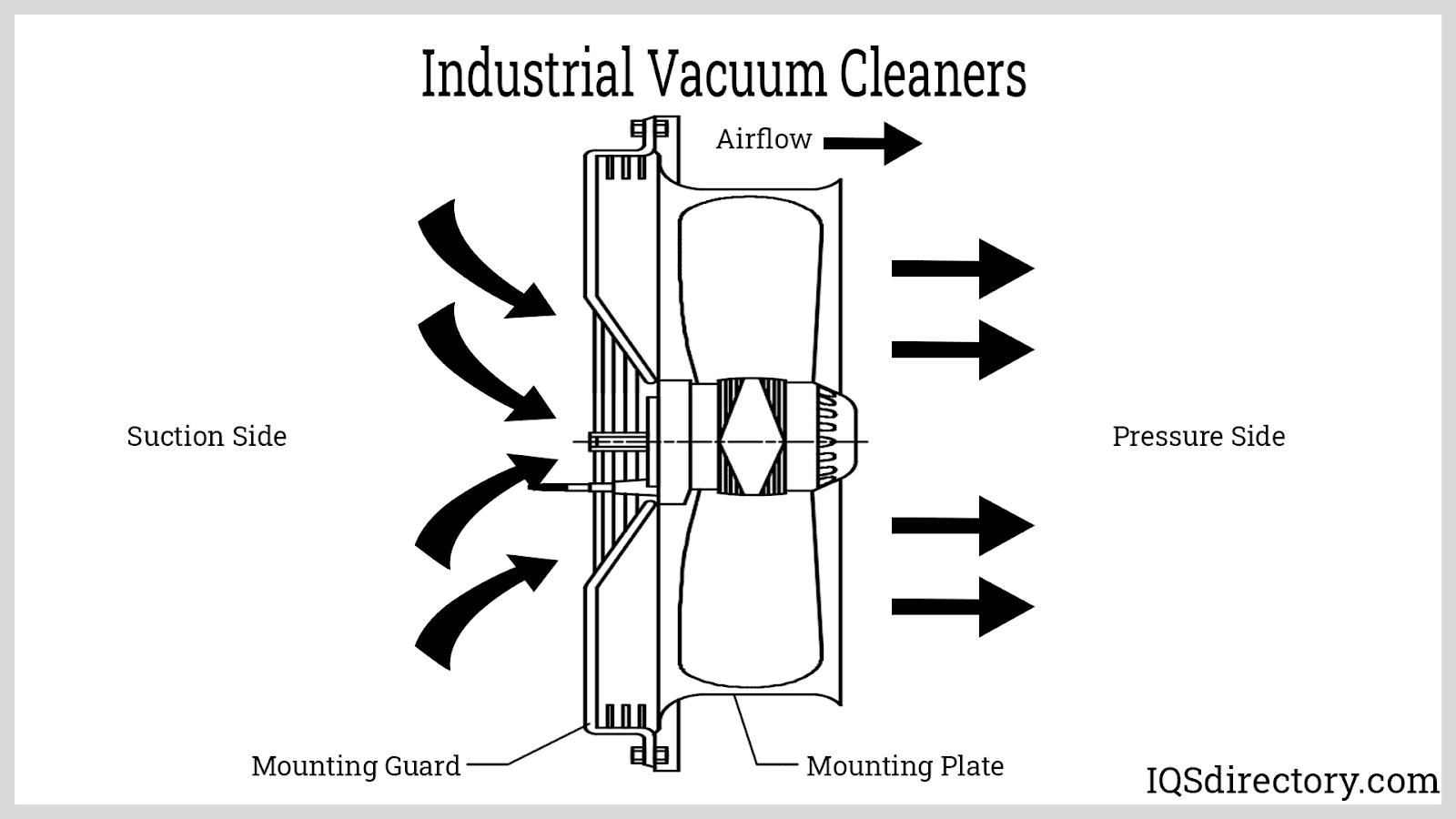 An industrial vacuum cleaner is a heavy duty piece of cleaning equipment designed to remove debris, industrial waste, construction refuse, and matter that remains after a manufacturing process or construction project... 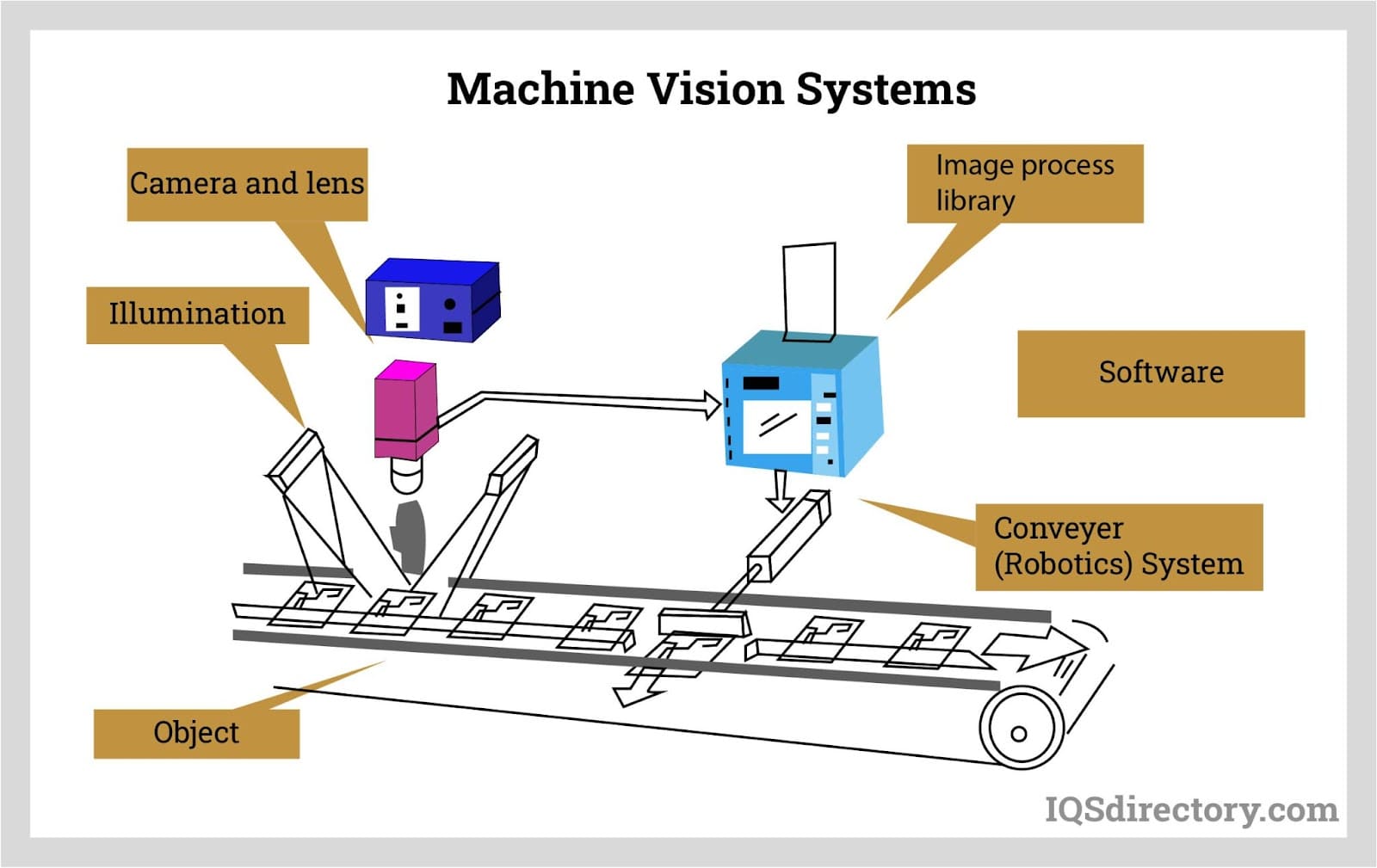 Machine vision systems are assemblies of integrated electronic components, computer hardware, and software algorithms that offer operational guidance by processing and analyzing the images captured from their environment. The data acquired from the vision system are... 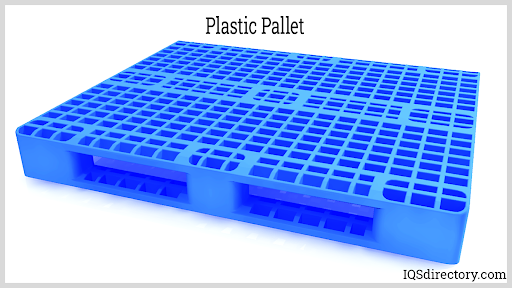 Plastic pallets are rigid structures that provide mechanical stability to a bulk quantity of goods during handling to preserve their quality. Handling includes all activities related to lifting, moving from one point to another, stacking, product storage, and long-distance transportation by land or sea... 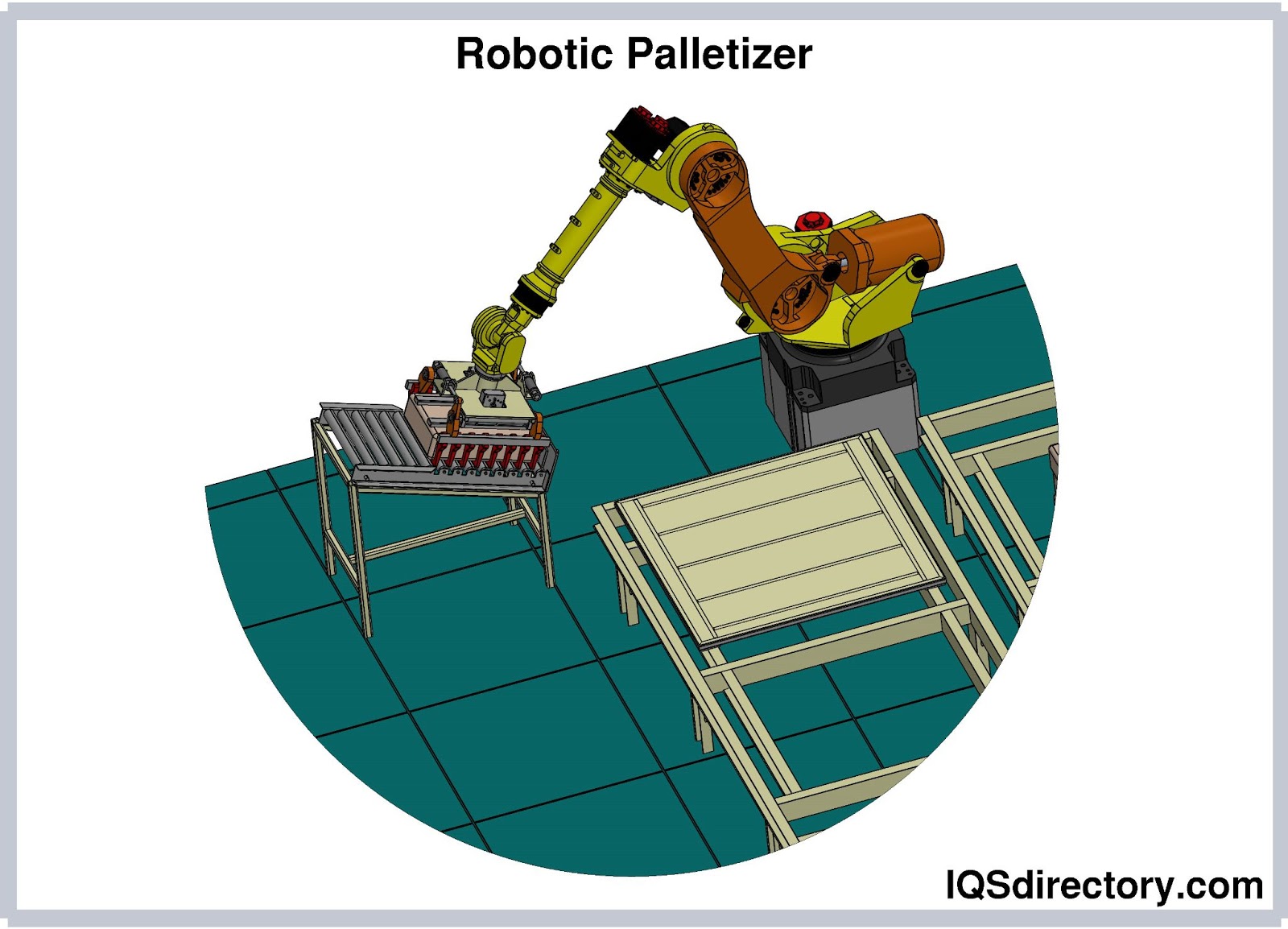 Shipping pallets are packaging materials which provide support on the pallet during transportation (i.e., marine shipment, land transportation). They are rigid, flat panels that provide stability to the goods during lifting (using a forklift or pallet jack), stacking, and transportation... Vibratory feeders are short conveyors used to transport bulk materials utilizing a controlled vibratory force system and gravity. The vibrations impart a combination of horizontal and vertical acceleration through tossing, hopping, or sliding-type of action to the materials being handled... During the Industrial Revolution, when companies began producing high volumes of industrial waste like fine dust, wood dust, and other particles, an American, in 1852, S.T. Jones, applied for the first dust collector patents, a single bag filter... Vacuum cleaners use suction to collect dirt, dust, waste products from industrial processes, and other debris for disposal, recycling, or reuse. They are mainly used for building maintenance and cleaning of industrial space...