Are You Ready For The Cyborg Technology Coming In 2021?

The term cyborg became popular after the release of the movie The Terminator in 1984. “The 600-series had rubber skin. We spotted them easy, but these are new. They look human… sweat, bad breath, everything. Very hard to spot.”

One of the main characters of the film, Kyle Reese, a soldier from the future, described the Terminators as cyborgs – machines with a metal endoskeleton inside, living tissue on the outside.

But that was in 1984…and featured Arnold. Are we anywhere close to that now?  Where is cyborg technology in 2018? Are cyborgs a part of our immediate future?

Let’s break down what you need to know:

What Exactly Is A Cyborg? 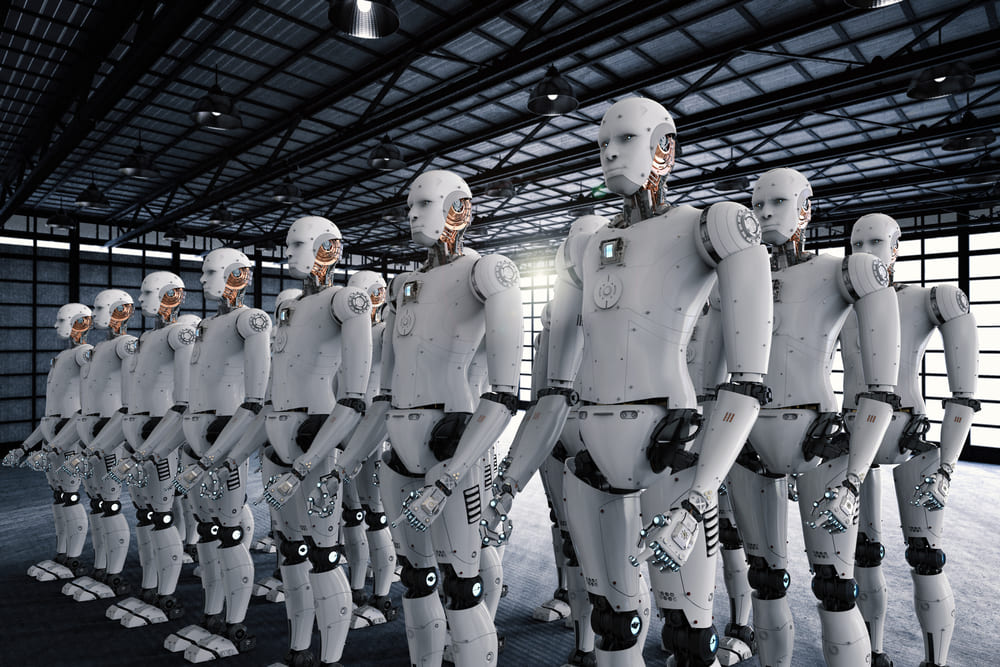 Over five decades ago, two scientists devised the word “cyborg” as a futuristic being who would be part machine and part human. When Manfred Clynes and Nathan S. Kline created the term cyborg in a 1960 article about “altering man’s bodily functions to meet the requirements of extraterrestrial environments,” they included chemistry, biology, and mechanical engineering.

Although it was science fiction at the time, today approximately 20,000 people have RFID chips under their skin that can unlock doors. These people are, in a sense, cyborgs.

A cyborg is a person who is, in some way, also physically connected to some form of technology.

For example, Neil Harbisson is a blind artist who can only perceive the world through an implant in his head. He foresees a new and improved future with enhanced senses through the use of technology. He says, “Night vision would give us the ability to adapt to the environment: design ourselves instead of the planet. Designing the planet is harming it.”

To understand the current state of prosthetics and artificial organs, one should consult cyborg expert Tim Maly. Maly’s argument is simple: Today’s materials will not allow for a complete, cybernetic human.

“It probably won’t be a mechanical body,” Maly told Gizmodo. “It will probably be some bio-grown body, and it won’t be recognizably to us as Robocop, because it’ll already be part of a long line of small improvements.” 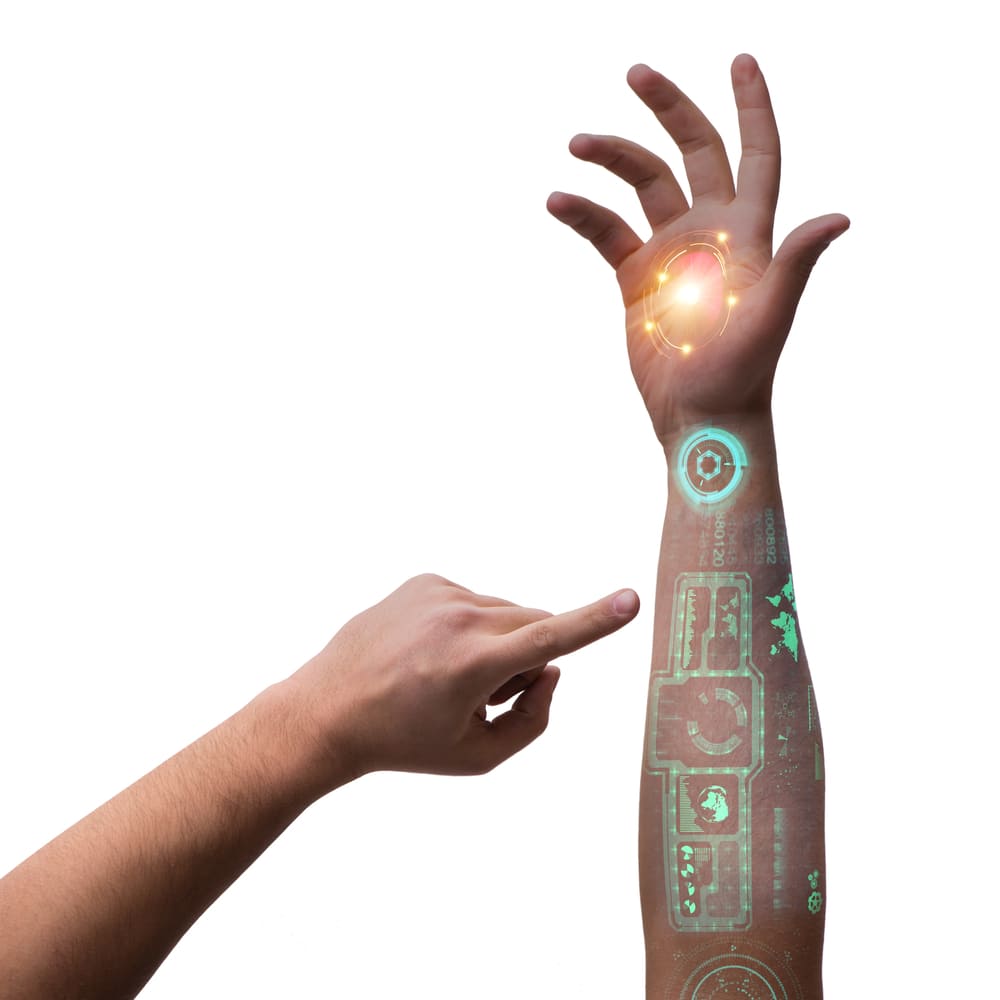 Today, humans are being melded with technology that didn’t exist even a decade ago. Enhanced dexterity, increased strength, and heightened senses are not science-fiction — they are here.

Currently, cyborg tech is most useful as support for people who live with a disability. Cyborg tech can replace missing limbs, damaged organs, and limited senses.

Here are six examples of the present day cyborg in action:

As noted earlier, activist and artist Neil Harbisson was born without the ability to see color. In 2004, he mounted an electronic antenna to the lower back of his skull that modulates frequencies of light into vibrations his brain recognizes as sound, allowing him to “hear color,” including infrared and ultraviolet.

“There is no difference between the software and my brain, or my antenna and any other body part. Being united to cybernetics makes me feel that I am technology,” he said in a National Geographic interview.

The LUKE Arm (named after Star Wars character Luke Skywalker) is a prosthetic that goes beyond everyday functionality and helps the wearer regain the sense of touch. It also contains all the basic functions of an arm and hand. Electronic sensors extrapolate signals from the wearer’s muscles and translates them into physical movement. The arm was made available to military amputees in 2016.

In 2002, at the age of 37, Jans Naumann, who was blinded in his 20’s, participated in a clinical trial at the Lisbon-based Dobelle Institute. A television camera was connected to his brain, circumventing his damaged eyes.

The system allowed Naumann to see Christmas lights at his home that year. Tragically, the system failed two weeks later. Upon William Dobelle’s passing (the inventor of the technology), no notes or documents were found so there were no instructions to repair Naumann’s system.

Getting A Leg Up

In 2012, years after his leg was amputated above the knee in 2009, Zac Vawter became the first recipient of the mind-controlled bionic leg. The technology translates brain signals into movement. Prior to Vawter’s bionic leg, the software that translates the brain signals was only used in upper limbs.

Give Us A Hand

Prosthetic tech giant, bebionic, has created some of the most intricate prosthetic hand designs as of 2017. Every joint along every digit is independently controlled by dedicated motors. The bebionic hand has fourteen preprogrammed grip patterns. The highly sensitive motors fluctuate the force and speed of the grip— it can gently hold an egg, or easily manage 99 pounds of weight.

The Eye Has It

Filmmaker, Rob Spence decided to replace his missing right eye with a prosthetic, wireless-transmitting video camera. Spence worked with RF Wireless Design to create a prosthetic eye shell that could hold the necessary electronics in such a small space. His cyborg eye camera can record up to 30 minutes of footage before depleting the battery.

There are still more cybernetic options available today. Neurobridge is designed to reconnect brain and body, and has actually enabled paraplegics to move again. It’s likely the most advanced linking of man and machine so far achieved.

These enhancements are arriving quickly, but quietly. Artificial retinas restore sight to the blind, and cochlear implants offer hearing to the deaf. Deep-brain implants, also called “brain pacemakers”, assuage the symptoms of 30,000 Parkinson’s sufferers around the globe.

Innovators are continuing to take things further with replacement organs, robotic prosthetic’s, and implants used to alter or enhance bodily functions. “This is the front line of the Human Enhancement Revolution,” wrote the technology author and philosopher Patrick Lin last year. “We now know enough about biology, neuroscience, computing, robotics, and materials to hack the human body.”

This technology can improve, augment, or replace every part of the human body, from vital organs to amputated limbs. A remake of the movie RoboCop, released in 2014, showed a distant future where technology and humans become one – but many experts say the age of the cyborg is already upon us.

From smart contact lenses used to improve vision, to military exoskeletons giving the wearers superhuman strength, cyborgs are a part of our immediate future. Google is currently developing smart contact lenses to monitor glucose levels of diabetics – and other developers are experimenting with smart lenses that could enhance vision capabilities.

Many innovators claim we will soon be able to send information directly into our vision nerves, using technology designed to help the blind see. We also already have basic exoskeletons that allow the elderly and disabled to walk.

Where Things Are Headed 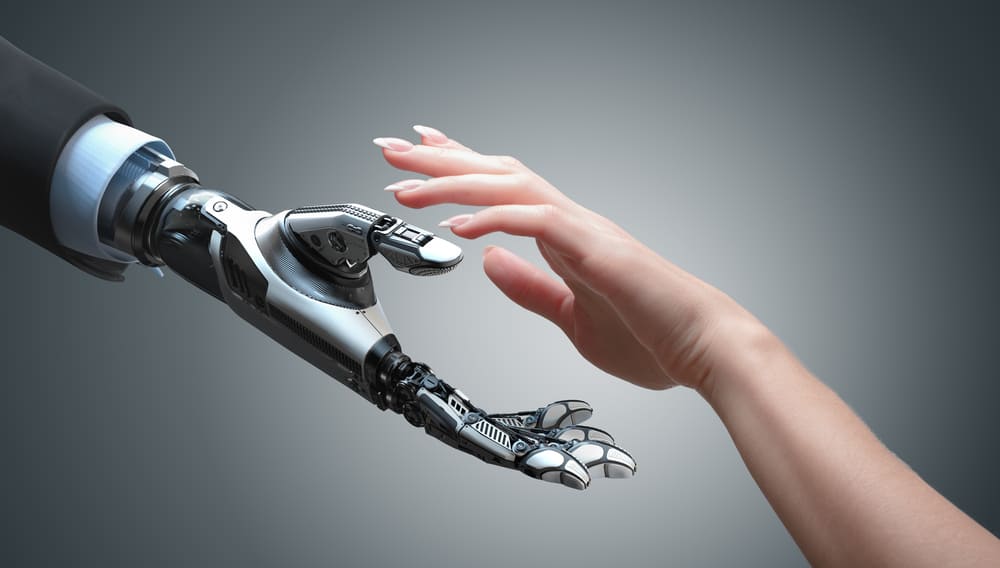 Clearly, we are already in the age of cyborgs. So where are things headed? What sorts of technologies will we continue to see develop? Here are five:

Connecting your mind with a computer has been science fiction for decades, but it is closer to becoming reality than ever before. Today’s neural implants consist of cochlear implants to restore hearing and retinal implants to repair failing vision. These are basic neural implants, but they are already being advanced.

Touch Bionics, a prosthesis tech company, has created a hand that can be controlled using a smartphone app. Though most of us would never consider adding a limb, many believe that the future is about improving our own limbs with a smart, computer-controlled prosthetic.

Current prosthesis are an enormous help to those who have lost limbs, and these prosthesis are getting smarter every day. “Touch Bionics’ i-limb prosthetic hand also features a rotating thumb, five individually powered fingers, a rotatable wrist, and aluminum chassis.” Touch Bionics claims this is the most advanced prosthetic hand ever made, and that it comes with 24 different grips.

This prosthetic hand can also be controlled using an app, but it was originally designed to interpret muscle signals

Nanotech, a medical miracle, delivers tiny ‘smart’ particles wherever needed in the body. One experimental lung cancer treatment has the patient inhale nano-particles by aerosol and the particles settle in diseased areas of the lungs. An external magnet superheats the particles which then kills diseased cells.

One Texas team has created super-strong artificial muscles made from nanotech fibers and filled with paraffin wax. The muscles can “lift more than 100,000 times their own weight and generate 85 times more power than the same size human muscle.”

Ray Kurzweil, the well-known futurist, believes that by 2040 to 2045, any human will be able to upload his or her consciousness into a computer. Though it seems like a sci-fi movie plot, one Russian billionaire has revealed that he plans to upload his own brain, thus becoming immortal, no later than 2045. Dmitry Itskov, 32, believes technology will let him live indefinitely in a hologram body.

According to Itskov, “The new human being will receive a huge range of abilities and will be capable of withstanding extreme external conditions easily: high temperatures, pressure, radiation, lack of oxygen, etc. Using a neural-interface, humans will be able to operate several bodies of various forms and sizes remotely.”

Technology experts say a real-life Harry Potter invisibility cloak is coming soon. It is true- researchers already have working invisibility cloaks, though they are far from optimal operation. Most recently, engineers encircled an object with small antennas that collectively radiated an EMI field, cancelling out visible light waves.

Would You Be A Cyborg?

The amount of cybernetic technology that already exists to help people with disabilities and to enhance the basic functions of our bodies is amazing.

While these tools are reserved for those with amputations or other disabilities, it does seem that commercially available bionic enhancements are not far away. Be on the lookout for options that could enhance your human experience.