Here is everything you want to know about a thermocouple on the internet.

Chapter One – What is a Thermocouple?

A thermocouple is a transducer that converts thermal energy into electrical energy and is constructed by joining wires made from dissimilar metals to form a junction. Voltage is produced when the temperature at the junction changes.

The concept of the thermocouple is based on the Seebeck Effect, which states that if dissimilar metals are joined at a point they will generate a small measurable voltage when the temperature of the point of connection changes. The amount of voltage depends on the amount of temperature change and the characteristics of the metals.

The structure of a thermocouple consists of two insulated wires connected to a measuring device with coaxial sheathing that is separated by insulated material. Thermocouples serve as a safety and monitoring gauge for various types of equipment.

The process of a thermocouple can be seen in the image below where the temperature is raised at the junction of the wires on the left, and the change in temperature is displayed on the gauge at the right.


Chapter Two – How Does a Thermocouple Work?

The idea of a thermocouple is based on three principles of effect discovered by Seebeck, Peltier, and Thomson.

The Seebeck effect happens when two different or unlike metals are joined together at two junctions and an electromotive force (emf) is generated at the two junctions, which is different for different types of metals.

An emf is generated in a circuit when two dissimilar metals are joined to form two junctions due to the different temperatures of the two junctions of the circuit.

How a Thermocouple Works

The circuit of a thermocouple is shown in the image below, where A and B are two dissimilar wires that are joined to form a junction. The two junctions are at different temperatures to generate the Peltier emf in the circuit, which is the function of the temperatures of two junctions.


Electrons carry heat and electricity. If a piece of copper wire is heated at one end, the electrons will move along the wire to the cooler end and create a temperature gradient along the wire. The heat has been changed into energy. This same principle, as discovered by Volta and Seebeck, applies to a thermocouple.

The EMF in the thermocouple circuit is very small, in millivolts, and requires a highly sensitive instrument for determining the generated EMF. Galvanometers and voltage balancing potentiometers are normally used with the potentiometer being used the most often.

A potentiometer, also known as a pot or potmeter, measures potential difference by comparing an unknown voltage to a reference voltage. It can provide high precision measurements. It is defined as a three terminal variable resistor and acts as an adjustable voltage divider.

Ambient air can influence the reference temperature. It can be calibrated and adjusted by a reference junction compensation device.

Some thermocouple applications require the use of a thermowell. This device is used to protect a thermocouple from a process media, and is made up of a closed tube or solid bar-stock that is mounted within said media. Thermowells are used most often in applications within refineries or chemical plants in order to extend the life of thermocouples. Depending on the application, different types of thermowells can be used. Some of these types include:

Thermowells are also categorized by the way they are connected to a thermocouple or thermistor. These connections types can include:

The difference between thermocouples is determined by the types of alloys used to produce their wires. The choice of the type of metal wire depends on the range of temperatures to be measured, the environment, and their mechanical strength. There are three types of connecting points for thermocouples – exposed, ungrounded or insulated, and grounded.

A thermocouple can be enclosed in a sheath to protect it from the atmosphere and reduce the potential of corrosion. Sheaths can be stainless steel, Inconel, and Incoloy. Inconel and Incoloy are registered trademarks for Special Metals Corporation and are nickel alloys. The temperature range of the various types of sheaths can be seen in the chart below.

Vinyl is low cost, has good flexibility, fair electricals, and is a general purpose material.

Teflon has high cost, a high temperature rating, excellent chemical resistance, and electrical properties but has poor cut through resistance.

Rulan is the same as polyethylene but is flame retardant.

Fiberglass excellent for high temperature applications and suitable for use with ambient temperatures where there is a possibility of hot spots.

Ceramic is used in commercial ovens and furnaces and can monitor ambient temperatures of fireboxes, kilns, and grills. Its temperature range is -58° F to 2200°F.

Conductor Jacket can be put over the primary insulation and is necessary when additional mechanical protection is needed. A jacket for vinyl Insulation Is nylon with polyethylene used for vinyl or nylon insulation. A conductor jacket acts as a mechanical barrier and prevents shorting.

Thermocouples come in different types for a variety of applications and use a system of letters to identify each type. There is a wide range of thermocouple types with their own characteristics and temperature ranges. The difference between each type is determined by their durability, temperature range, resistance, and applications.

Types E, T, N, J, and K are the most common of the thermocouples and have base metals of iron, copper, nickel, and other such metals. Below is a description of each.

Type E thermocouples have chromel, a nickel and chromium alloy, as a positive leg and constantan as the negative leg. They have a temperature range over -330° F to 1600o and have excellent EMF versus temperature values. Type E can be used in sub-zero temperatures and have colorings of red or purple.

Type K thermocouples have chromel for the positive leg and alumel for the negative. Alumel is an alloy made of mostly nickel with low percentages of aluminum, silicon, and manganese. Type K thermocouples are used in inert or oxidation environments with a temperature range of -300° F to 2300° F. Their color coding is red or yellow.

Type T thermocouples have copper as the positive leg and constantan as the negative one with a temperature range of -330° F to 700° F and color coding of red or blue.

Noble metal thermocouples, or platinum thermocouples, are types B, R, S, and P with precious metal elements. They are accurate at very high temperatures and have a long lifespan of use.

The Type B thermocouple is used in extremely high temperature applications and has the highest temperature limit of all of the thermocouples with exceptional accuracy and stability. Its temperature range is 2500° F to 3100° F.

The Type P has the same curve at high temperatures as Type K and can be used in oxidizing atmospheres with a temperature range up to 2300°F. A Type K extension wire is used to connect a Type P thermocouple to the measuring instrument.

Chapter Four – Uses for a Thermocouple

Their small size and fast response, as well as their ability to endure shocks and vibrations, makes them perfect for temperature control and measurement.

Below is a description of a few of the applications for thermocouples.

Thermocouples are perfect for the food industry because they supply accurate readings in a few seconds. Food products can be checked in any phase of production. Food production thermocouples are a two piece unit with a handheld readout unit and detachable probe. In the tip of the probe are two wires connected to each other. Flat headed probes measure surface temperatures, needle probes take internal measurements and the air temp of ovens.

Extruders require high temperature and pressure. The sensor tip has to be positioned in the molten plastic under high pressure conditions. The thermocouple measures the temperature and is directly installed into the process. These units have high degree of accuracy, with a rapid response time, and can have a type K thermocouple probe.

A pilot light is responsible for igniting the furnace burner. The thermocouple shuts off the gas supply when it does not sense a flame and prevents the furnace from receiving gas when the pilot is out. It restricts gas from building up in a furnace and makes the system much safer.

A molten metal thermocouple can be used in a non-ferrous metal environment to measure temperatures up to 1250° C. They monitor and control the temperature of liquid metals during melt preparation, holding, degassing, and casting operations.

Finding the right instrumentation for high pressure applications is very difficult because of the high temperatures and heavy vibrations. Resistance thermometers (RTDs) and thermocouples are the commonly used temperature sensors for high-pressure industrial applications. Thermocouples have been found to be the better choice.

There are two configurations of thermocouples for high pressure applications, which are pictured below:

Chapter Five – How to Test a Thermocouple

Though thermocouples are very reliable and durable, they can fail over time and need to be checked. Regardless of the fact that there is a very wide variety of thermocouples, all of them operate on the same basic principle of two connected wires with one of the wires being the reference and the other being the hot wire.

Multimeters come in multiple forms and styles. Regardless of the variations, there are some basic symbols that are displayed on all types.

There are also prefixes that may be displayed as well.

Multimeters have settings for measuring AC and DC currents.

The multimeter should be able to read ohms, the opposition to current flow in an electrical circuit. Conductors offer little resistance, while insulators have high resistance. Silver, copper, gold, and aluminum are examples of conductors and are metals found in thermocouple wires. The multimeter for testing a thermocouple has to be very sensitive since thermocouples produce millivolts.

Depending on the type of test, the thermocouple will be removed or remain installed. If an open or resistance test is being performed, the thermocouple is removed. For the closed circuit test, an adapter is required for insertion of the thermometer.

There are three types of tests that can be performed.

Chapter Six – How to Read a Thermocouple

Thermocouples are a cost effective method for measuring a wide range of temperatures with accuracy. They are used in boilers, water heaters, ovens, and airplane engines.

A homogeneous wire is physically and chemically the same throughout its length. A thermocouple circuit, made with the same wire, will not generate an emf, regardless of a change in temperature and thickness. For a thermocouple to work properly, it must have two different metals to generate voltage.

The sum of the emfs, with two or more different metals, is zero if the circuit is at the same temperature. The addition of different metals to a circuit will not affect the voltage the circuit creates. The added junctions are to be at the same temperature as the junctions in the circuit. For example, a third metal such as copper leads may be added to help take a measurement. This is why thermocouples may be used with digital multimeters or other electrical components. It is also why solder may be used to join metals to form thermocouples. 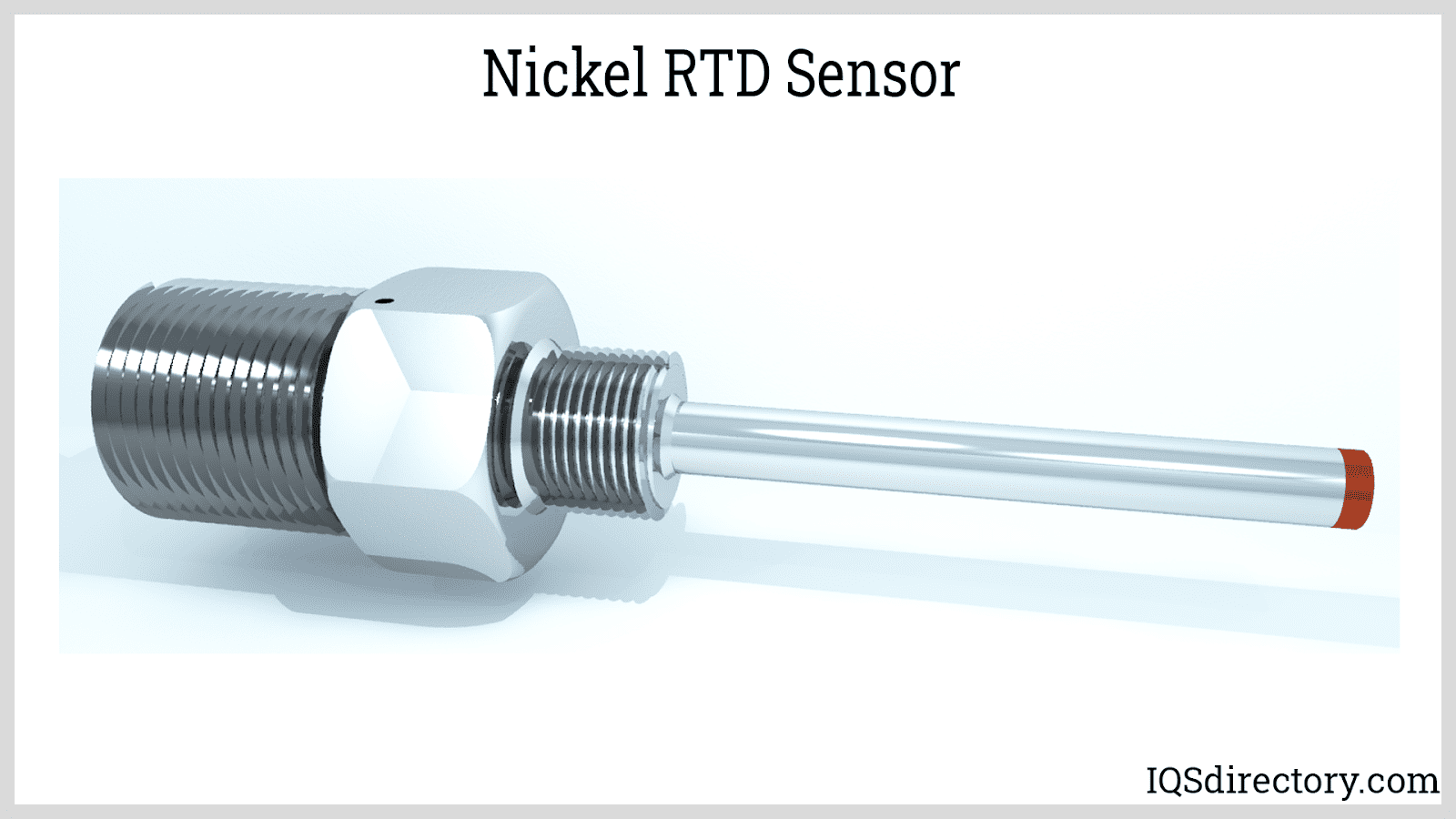 An RTD, resistance temperature detector, is a passive temperature sensing device that operates on the principle that the resistance of a metal changes as the temperature changes. The electrical current that passes through the element... 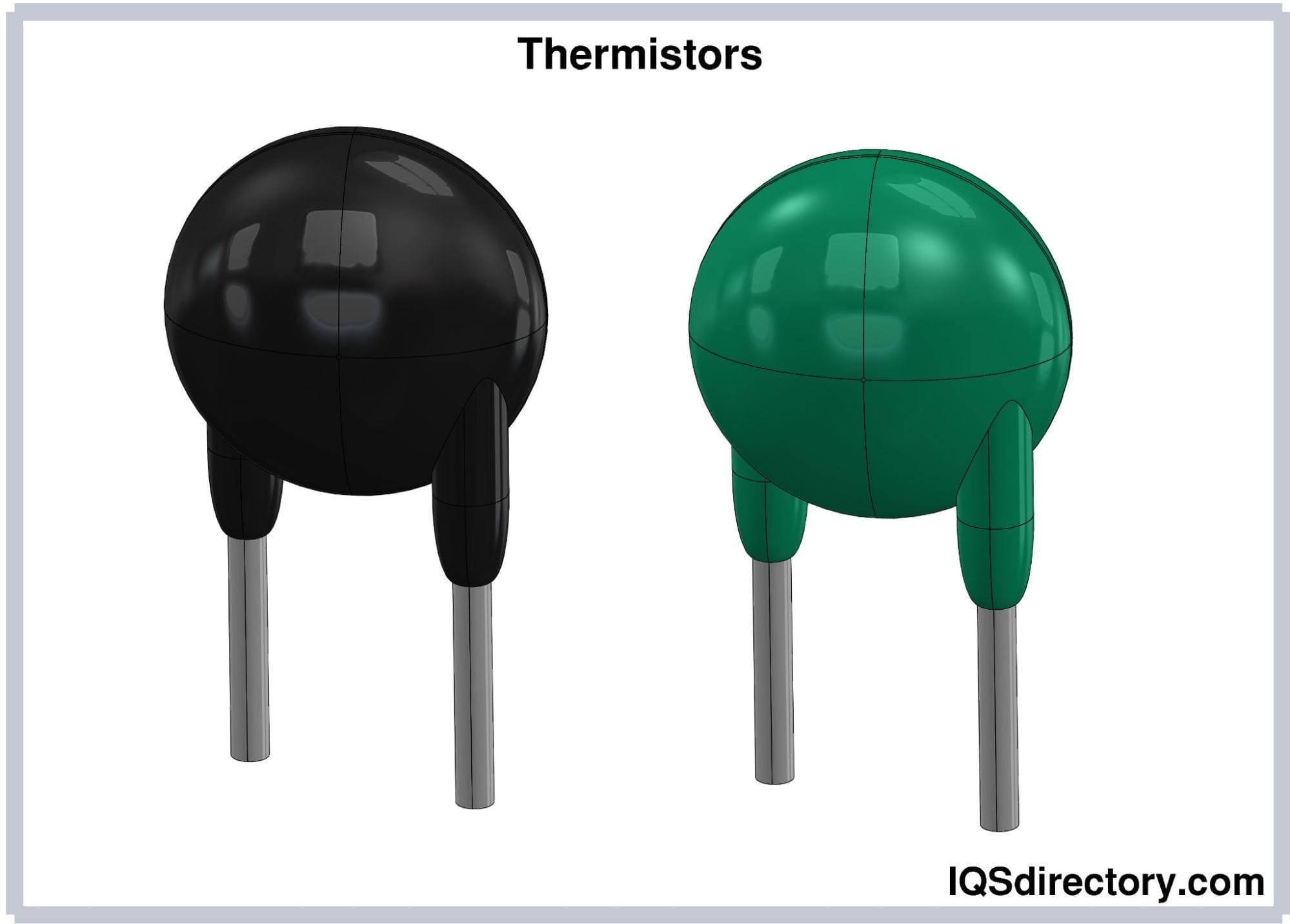 A thermistor, a shortened version of the term thermal resistor, is a passive component whose resistance changes as the temperature in a system changes. Thus they serve as an inexpensive, accurate, and dynamic method for measuring temperature... A heating element is a material or device that directly converts electrical energy into heat or thermal energy through a principle known as Joule heating. Joule heating is the phenomenon where a conductor generates heat due to the flow of electric current...