This article contains all the information you need to know about Tube Bending. Read further and learn more about:

Below you will learn:

Chapter One – What is Tube Bending?

Tube bending is a mechanical process used to deform tubes using a bending process that transforms straight tubes into curved shapes. Although straight tubes are beneficial for certain applications, in many cases, to meet specific requirements, tubes need to be bent, shaped, and stressed.

Bent tubes are more useful than straight ones and are an integral part of trombones, stair railings, handles, furniture frames, automotive parts, and air conditioning equipment Pipes and tube fittings are types of bent tubes used to change the direction of conduits for fluids and gases in exhaust systems, hydraulic lines, and pipelines.

Any type of metal tubing can be bent including aluminum, stainless steel, mild steel, brass, and titanium that are changed into a wide variety of shapes and configurations each of which is designed for a specific purpose. The most common types of bend shapes are L bend, U bend, S bend, and coil bend, which are shapes that are created by applying force that stresses and reconfigures straight metal tubing.


At the beginning of a bending operation, the metal tube is secured by a clamp die and pressure die after which a rotating die, roller, or press bends it. The process can be form bound or free form. Tensile and compressive forces act on the tubing material as the tooling advances it through the tubing die. The results of the bending are dependent on the type of tubing material, tooling, the amount of pressure applied, lubrication, and the bending geometry.


Mechanical tube bending is a collection of processes that are used to make an assortment of products and assemblies out of a straight tube. Aside from tube bending, other mechanical processes include cutting and deburring, slotting, notching, and welding.

Before selecting the right die for a specific type of tube bending, it is beneficial to know the geometry of a bend. The following terminologies are used in tube bending:


Center-Line Radius. Center-line radius (CLR) refers to the distance from the center of the curvature to the centerline (axis) of the tube. It can be equal to the radius of the die, depending upon the extent to which the die is forced on the tube. For tubes with the same radial dimensions and material, the length of the curvature increases as CLR becomes larger. CLR is oftentimes referred to as the bend radius.


Outside Diameter. In hollow cylinders like tubes, the outside diameter is the distance between two points on the outermost edges of the tube‘s cross-section which passes through the centerline.

Inside Diameter. Inside diameter is the distance of the innermost edges of the tube‘s cross-section which passes through the centerline. It is the size of the tube‘s hole.

Wall Thickness. Wall thickness is the difference between the outside and inside diameters of a tube. It is the width of the tubing material, usually measured by calipers for precision. The outside diameter and the wall thickness of the tube are the most important considerations when choosing a die for a tube bending method.

Difference Between Tubes and Pipes

Tubes and pipes appear to be the same and can be subjected to the same bending techniques. The terms, tubes and pipes, are often used interchangeably but actually refer to two distinct and different components. Tube is a general term used to describe round, square, rectangular, or oval hollow shapes that are used for mechanical and structural applications, pressure equipment, and instrumentation systems.

There are several physical changes per area that the tube experiences during bending, depending on the bending technique used and the properties of the tubing material.

Wall Factor. The wall factor is the relative wall thickness. It is the ratio of the outside diameter of the tube and its wall thickness. The resulting value determines whether a tube is "thick-walled" or "thin-walled".

The wall factor is used to assess the difficulty of making any kind of bend. Tubes with lower wall factors are easier to bend because less material is required to stretch. Tubes with higher wall factors require more sophisticated dies and mandrels to support the tube.


D of the Bend. The "D of the bend" is a technical term used by tube fabricators which refers to the ratio of the CLR of the bend to the tube‘s outside diameter. This value tells how difficult the tube is to form tight radii. The higher D of the bend, the easier it is to form bends with tighter radii. In an ideal unsupported bend, the tube must have a combination of low wall factor and high D of the bend. Otherwise, it may result in a flat tone bend. This results when the outside wall of the bend collapses because it is not thick enough to support itself. Elongation refers to the extent to which a material can stretch before a fracture occurs. The higher D of the bend, the more material required to stretch it to produce bends with a tighter radius. Elongation is not only dependent on the D of the bend, but also on the material‘s property (i.e., stainless steel has a higher percentage of elongation than mild steel).


Springback. When a tube is bent to a certain degree, it tends to return to its original flat shape which results in a slightly smaller bend angle. To compensate for this phenomenon, an operator will slightly "overbend" to make up for the angular difference to meet the desired bend angle.

The movement of a tube in an attempt to return to its original shape during bending is referred to as springback. When a bend in a tube is created, an uneven molecular density from the shrinking and stretching of the material occurs. The inner region of the bend is compressed while the outer region is stretched. The tensile forces on the stretched region are greater than the compressive forces, which causes the bent tubing to return to its original shape.

In the tube industry, a common term used to describe the radius of the bending of a tube is the center line radius or CLR, which is the radius down the center of the tube. For most dies, the CLR will be larger than that of the die, especially where a mandrel is not used, and there isn’t any push. As the CLR increases, the more variability there will be in springback between each bent piece. Such variations have a direct impact on the position of the bend.

An increase in the CLR is caused by springback. As the tubing is springing back, the radius is springing open. In the case of most bender dies, the CLR equals the size of the die multiplied by 1.042. This formula can be used when a die does not permit a 180° bend.


Springback is influenced by several factors such as the material‘s stiffness, tensile strength, and wall thickness, type of tooling, and bending technique used. Harder materials and smaller CLR produces a greater springback. The bend angle is always augmented by a springback factor which is derived from performing several test bends. Springback factor is not constant for all materials and changes for varying wall thickness and diameters.

Press bending is the oldest industrial tube bending technique. In this method, the tube is fixed at two points and the ram (or the bend die) is forced against the tube to conform to the shape of the bend. The external dimensions of the cylindrical ram give the characteristics of the bend to be enforced to the tube.

Press bending is a quick bending method for symmetrical parts and requires no lubrication and cleaning. However, it is difficult to make a smaller degree of bend using this method. It offers no support on the tube internally; hence it is prone to deformation in the internal and external curvatures. It often produces an oval cross-section, depending on the tube‘s wall thickness. This method of bending is difficult to control and is only used when a consistent cross-section is not required.

Rotary draw bending is a suitable method to create precise bends with constant CLR and constant diameter, giving minimal ovalization. Some of the applications of this technique are found in pipe fittings, instrument tubing, handrails, automotive and aerospace parts. This method is also used for hollow sections with different cross-sectional shapes (e.g., square, oval). A smooth and aesthetically-pleasing bend is produced from the right tooling used matched to the application.


In this method, bending is done by a set of interlocking dies, and the tube is supported internally by a mandrel.


The following are the hot tube-bending techniques that use heat energy to enhance the tube‘s plastic deformation during bending. Hot tube bending is commonly used for bending polymeric tubes such as PVC, CPVC, and ABS.

Application of lubricant is necessary before the insertion of the dies to reduce friction, prevent premature wear, and extend the life of the tooling. Lubricants are supplied as a paste or gel and have unique formulations for different tubing materials such as steel, aluminum, copper, and titanium. Areas for lubricant application are inside and outside of the tube, bending mandrels, contact point of wiper dies, and bending springs. More concentrated lubricant application is required for heavier duty bending (i.e. thicker walls and tight radii). After the bending operation, the remaining lubricant is cleaned on the surface of the tube and dies. Tube fabricating machinery refers to machinery that either bends, cuts, or forms tubes and pipes into various shapes and sizes permanently. These machines work tubes constructed from materials with high ductility and malleability such as... 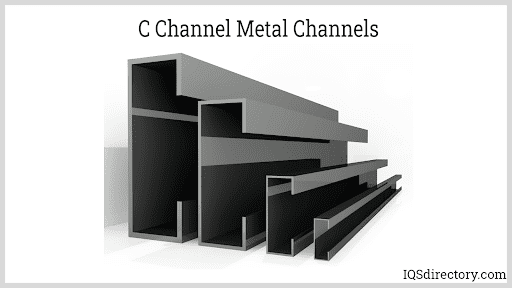 A wire brush is an abrasive tool that has stiff bristles made from a variety of rigid materials designed to clean and prepare metal surfaces. The filaments of wire brushes are small diameter pieces of inflexible material that... Precision sheet metal fabrication is a common manufacturing process where the structure of a metal workpiece is cut, bent, and assembled by machining. There are any number of operations that are performed in the creation of a finished sheet metal product... 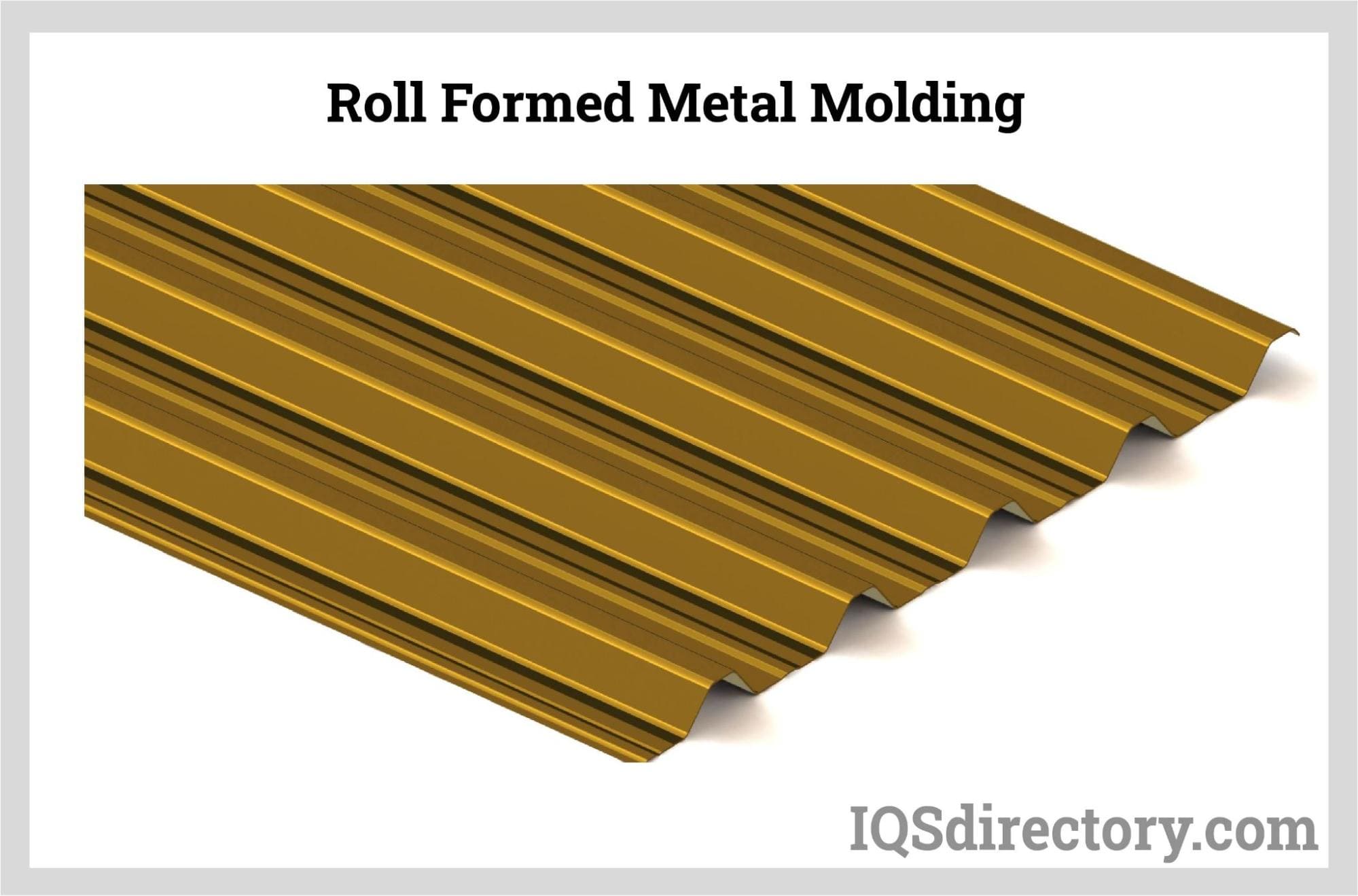 Roll forming is a gradual process of bending a flat sheet of metal to obtain a longitudinal and uniform profile by processing it through a set of mated tool dies. The process is carried out until a uniform shape is obtained.... 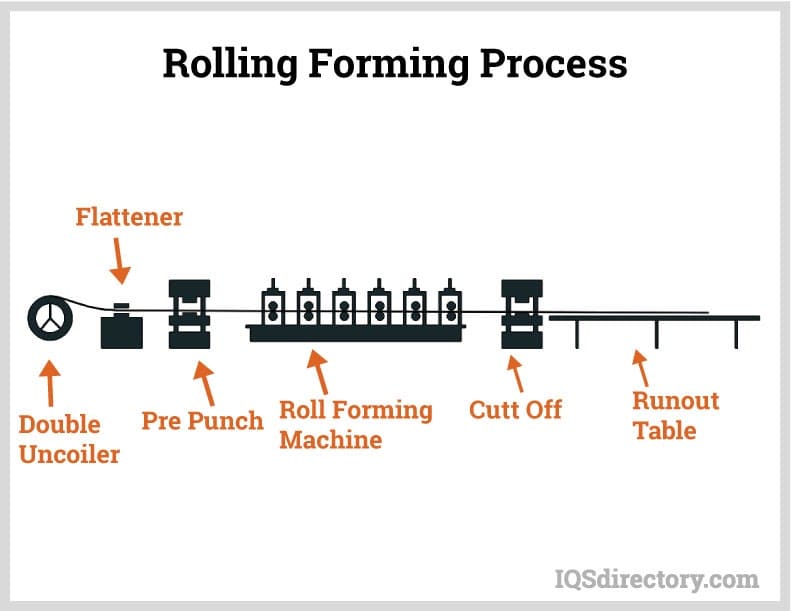 Roll forming is a process that uses a set of precisely placed rollers to perform incremental bending to a continuously fed strip of metal. The rollers are mounted in sets on a consecutive stand with each roller... 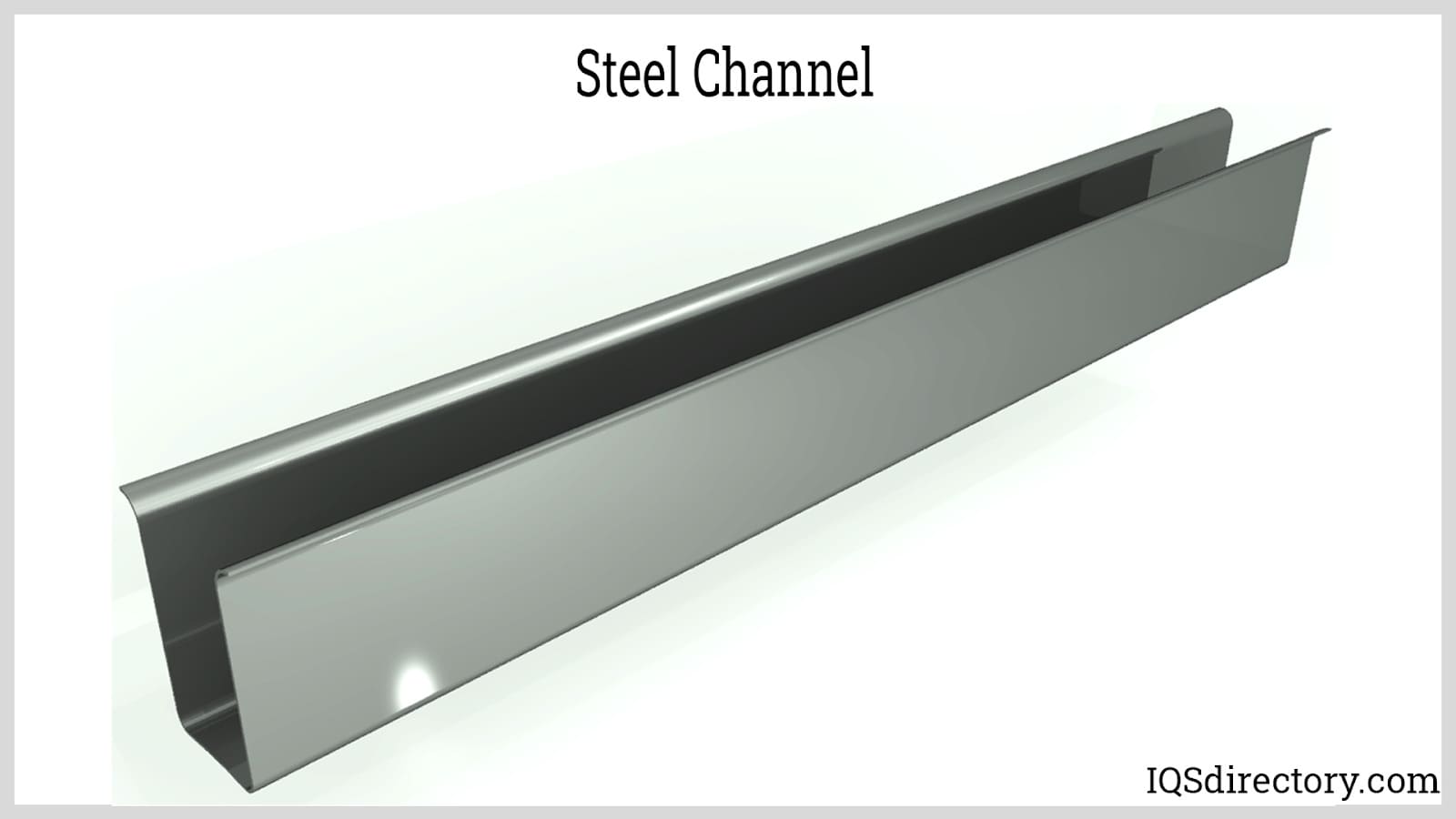 Steel channels are "C"-shaped hot-rolled carbon steel built with vertical web and inside radius corners on the top and bottom horizontal flanges. Steel channels consist of a wide web and two flanges, which can... 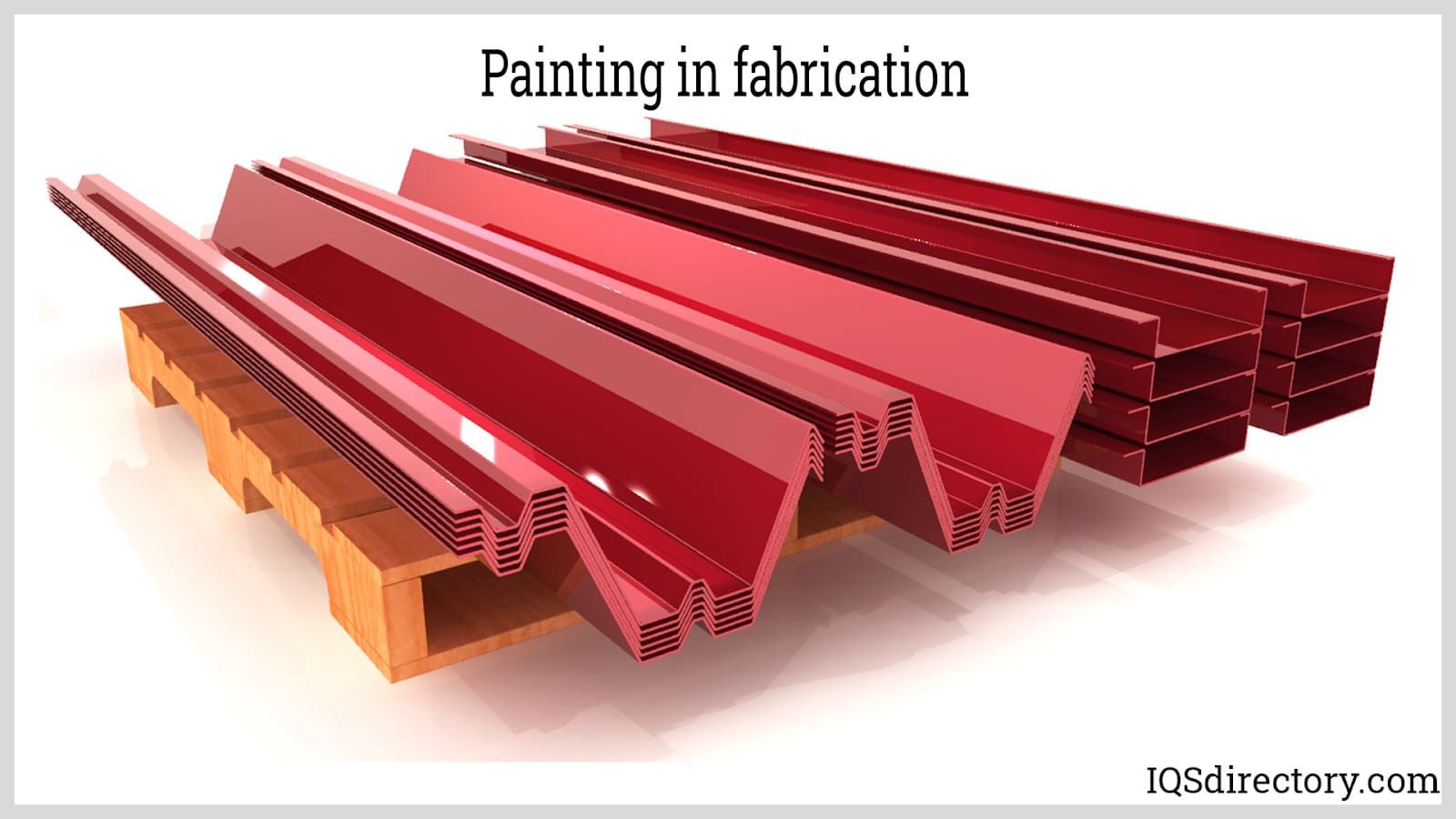 Secondary manufacturing processes, or fabrication, work on products from primary processes to create a metal part or structure that is suitable for end-use. In these processes, semi-finished metal products are reshaped and joined...