This article offers a comprehensive overview of air dryers.

Read further to learn about topics such as:

Chapter 1: What Is An Air Dryer?

An air dryer is a system or piece of equipment that is used to remove moisture present in the air, particularly compressed air. Ambient air typically has a relative humidity of around 30 to 50%. Compressing air packs higher quantities of moisture in a small volume. This increases the relative humidity to 100% while the excess moisture that cannot be held condenses.

Air with high moisture content is detrimental to plant operation and reliability downstream equipment as it can cause process stream contamination, premature failure and wearing of instrument parts, equipment corrosion, and so on.


Compressing air is not the only process that requires moisture removal. Some examples of other industrial and manufacturing processes that facilitate water removal are dewatering, baking, industrial drying, dehydration of foodstuffs, steam heating, and cleaning. These processes need different types of dryers which are mainly used for removing moisture from a product or mass to make it dry, solid, and pure. The dryers used for these applications operate through the basic principles of heat transfer which are conduction, convection, and radiation. Air drying differs in that it removes moisture through refrigeration, adsorption, absorption, diffusion, and filtration.


The dew point temperature is the temperature at which the air becomes saturated with water vapor. At this temperature, water vapor from air begins to condense and precipitate on surfaces of objects such as walls of a pipe, the internals of a tank, or surfaces of dry products.

Relative humidity can be manipulated by increasing or decreasing the temperature. However, the amount of water vapor and the dew point temperature is still the same.

An air dryer is an essential component of compressed air systems. Moisture and condensation are an inevitable byproduct of air compression. Water can condense and accumulate within the compressor unit and also to the equipment and processes downstream. Below are some of the advantages of using air dryers.

As mentioned earlier, air dryers remove moisture through refrigeration, adsorption, absorption, diffusion, and filtration. This chapter tackles each type of air dryer and its principle of operation.

Refrigerant dryers are types of dryers that work by cooling the stream of air to a temperature low enough to condense water vapor. This temperature is usually at or below the dew point temperature. Compressed air is normally at a saturated state which means it is at its maximum capacity for holding moisture. At this state, it also has a temperature the same as or above ambient. Since air with a higher temperature can hold more water than cold air, cooling removes water by decreasing the water holding capacity of the air. This forces the excess water vapor to precipitate or condense.


Refrigerant air dryers are suitable for high-capacity applications. However, they are not as effective as other air dryers in removing moisture. Refrigerant dryers can achieve dew point temperatures of 2 to 3°C (35 to 37°F).

Refrigerant dryers can be divided into two systems: the air circuit and the refrigeration circuit.

Desiccant dryers use hygroscopic materials to capture moisture from the air. These materials, known as desiccants, are dry, solid particles that work using the principle of adsorption. The surface of these materials has pores that act as sites for adsorbing certain molecules through intermolecular attractions. This ability of such materials is specifically known as physisorption. Common physisorption desiccants in the market are silica and activated alumina (molecular sieves). These desiccants are supplied in powdered, pelletized, or bead-like form taking advantage of a larger surface area in contact with the air.

Desiccant dryers are one of the most effective types of air dryers. They can reach dew point temperatures as low as -40°C (-40°F).

A desiccant dryer is made up of one or more vessels that contain the desiccant material. Inside the vessel are internal components such as a screen, tray, or bed for containing or holding the desiccant in place while allowing passage of air. Air is usually introduced at the bottom of the vessel and discharged at the top. As air is supplied and dried, the desiccant becomes saturated which diminishes its ability to capture moisture. Before this state is reached, a regeneration phase is done to regain its drying effectiveness.


Regeneration is the process of removing the captured water molecules at the surface of the desiccants through heating and purging. Desiccant dryers featuring continuous operation usually have at least two vessels. One is in the drying phase while the others are in the regeneration phase.

Regeneration is done through three different methods: pressure swing, heat of compression, and blower regeneration. The regeneration method used represents the type of the desiccant dryer.

In contrast with desiccant dryers that work through adsorption, deliquescent dryers utilize the principle of absorption. This type of dryer also uses a hygroscopic material that gradually dissolves as it absorbs moisture, hence the term deliquescent. Deliquescent dryers can reach dew points of -7°C (20°F).

The vessels used for deliquescent dryers operate similarly to that of desiccant dryers. The vessel has a bed of hygroscopic materials contained by a screen or tray. Hot, wet air is also supplied at the bottom of the vessel and discharged at the top. The main difference is the behavior of the drying media. Deliquescent drying media does not become saturated. Rather, it becomes consumed as the water dissolves and liquefies the material. the liquefied solution falls at the bottom of the vessel where it is collected and drained.

Because the drying media is consumed, the vessel cannot be regenerated. The drying media is replenished regularly to ensure reliable performance. Since there is no drying and regeneration phase shifting, no moving parts are needed for it to operate. It can operate passively in remote and hazardous locations where electrical supply is unavailable, unsafe, or impractical.

Membrane dryers remove moisture by passing moist air through tiny tubes or hollow fibers made from a semi-permeable material. These hollow fibers are bundled together in a canister with several openings for the compressed air supply, dry air discharge, and moisture exhaust. Membrane dryers can be as effective as desiccant dryers which can reach a dew point of -40°C (-40°F).


Moist air is introduced on one side of the membrane canister and discharged as dry air on the other end. The flow is driven by a pressure gradient between these two ends. As the moist air travels through the canister, water molecules permeate through the membrane wall of the fibers. This semi-permeable action of the membrane is driven by a concentration gradient. Water tends to migrate at a faster rate to the side with lower moisture concentration which is outside the hollow fibers.

Concentration gradient is only one type of membrane diffusion mechanism. Other mechanisms include diffusion through pores and molecular sieving.

Membrane dryers are useful in applications that require reliable and continuous operation without the need for automatic control or external intervention. These dryers do not need external power sources or control units to operate. They can also produce high-quality dry air because of their inherent efficiency in removing moisture along with other contaminants. However, membrane dryers have a limited capacity compared to other dryers. High-pressure loss is also a problem since the air must be forced across the bundled fibers.

Coalescing dryers function as filtering devices that trap tiny water droplets instead of water vapor dispersed in the stream of compressed air. These devices do not only capture water, but also other sub-microscopic contaminants such as oil and particulate matter. Because of this, they are more widely referred to as filters instead of dryers.


The working principle of coalescing dryers and filters lies on three mechanisms: diffusion, interception, and impaction. Diffusion is the ability of sub-microscopic particles or aerosols to move randomly and independently of the bulk air stream. As these sub-microscopic particles move randomly, they eventually collide and adhere to the filter surfaces. Water droplets accumulate on the surface of the filters and form a larger mass which then trickles down from the filtering system.

For particles and aerosols on the microscopic scale, their movement is less random, and they flow together with the air stream. These contaminants are removed through the interception mechanism. Filtration by impaction works by trapping them on the gaps between the fibers.


For larger contaminants such as water droplets, the impaction mechanism governs. Water droplets moving with the air stream have high inertia because of their larger mass. As they collide with the filter fibers, they become trapped and accumulate with other water droplets.

Coalescing dryers are designed depending on the size of the target contaminant and removal efficiency. For bulk water removal, the usual design is thin, multi-layered, corrugated plates stacked together to form microscopic gaps in between. Water is removed from the air stream through impaction.

Coalescing dryers are typically used in tandem with other air dryers. They act as a preliminary drying unit directly after the compressor or aftercooler. This is to lessen the drying load and remove contaminants that can deactivate the drying media of the main drying unit. They are used upstream of desiccant and membrane dryers.

For refrigerant and deliquescent dryers, coalescing dryers are more useful downstream. This is because the water droplets from the condensation of the water vapor and the brine solution from the liquefaction of the deliquescent substance can travel together with the discharge air stream. Water droplets entrained in the air stream pose a larger problem to downstream equipment than the presence of water vapor; thus, the need for coalescing dryers. 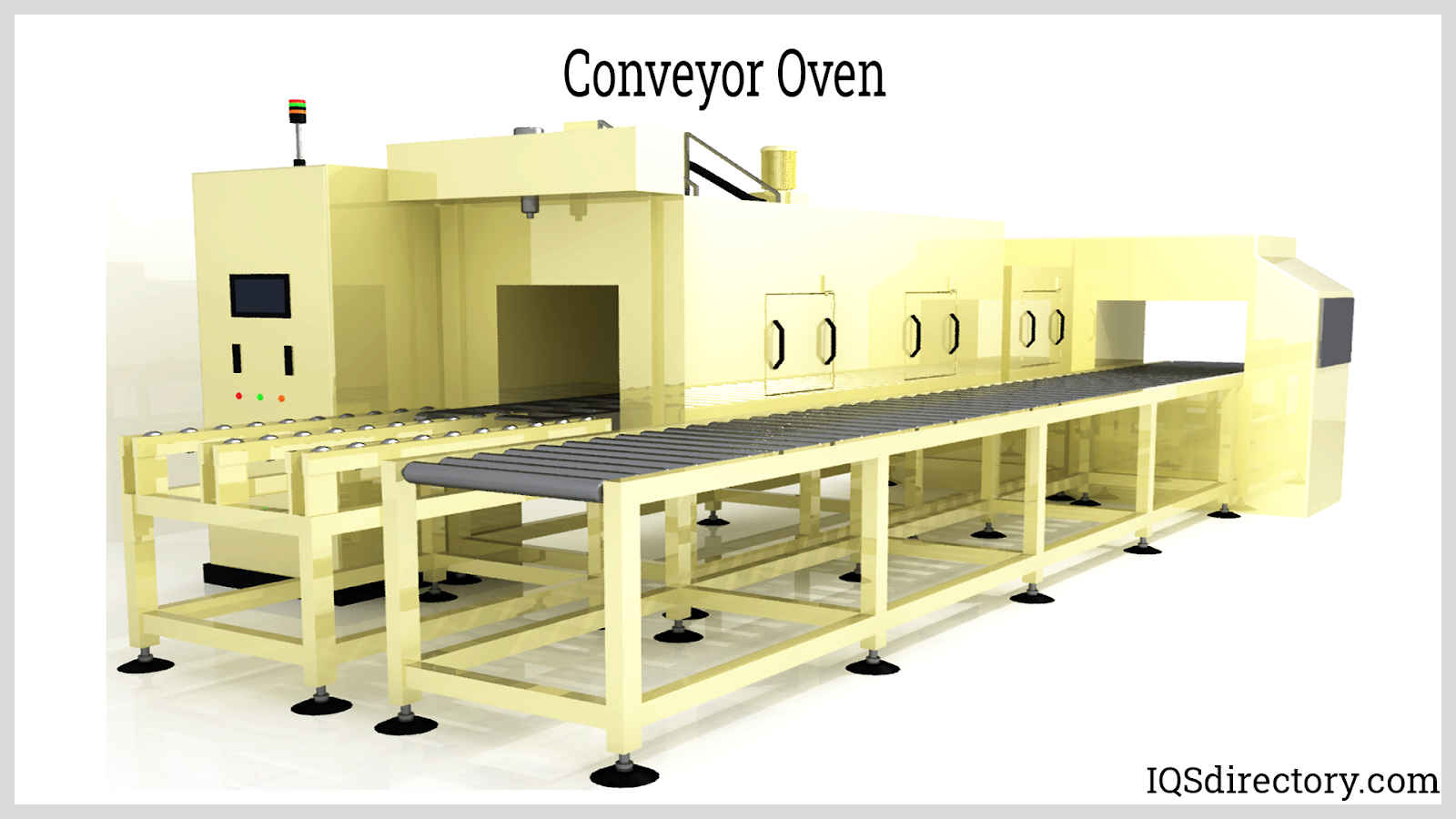 A conveyor oven is a continuous flow oven; it‘s an oven that is open on opposing sides and has a conveying system running from one end of the oven to the other. Designed like a batch oven, conveyor ovens have the additional benefit of keeping products moving while providing continuous and uniform heat...