According to Statista, there are 2.46 billion social media users worldwide. More than 81% of the U.S. population had a social media profile in 2016 and, on average, Americans spent over 300 minutes a week on social media. Needless to say, people like social media (and they use it a lot).

However, not all social media platforms are created the same. Log onto Facebook and you might see a picture of what your aunt made for dinner; open Twitter and you will see the President singling out a member of congress for voting against his bill.

The reason different platforms exist is because each one specializes in different kinds of content and different interactions. This is not a big deal for personal accounts, but for a company with resources on the line, it is important to know which outlet has the best results.

The possibility of wasting time and money on an ineffective social media channel scares away many manufacturers. As a result, they miss out on a potentially lucrative digital marketing strategy.

Manufacturers need to invest in social media, but where should they begin?

The two best social media platforms with proven results for manufacturers are YouTube and LinkedIn. 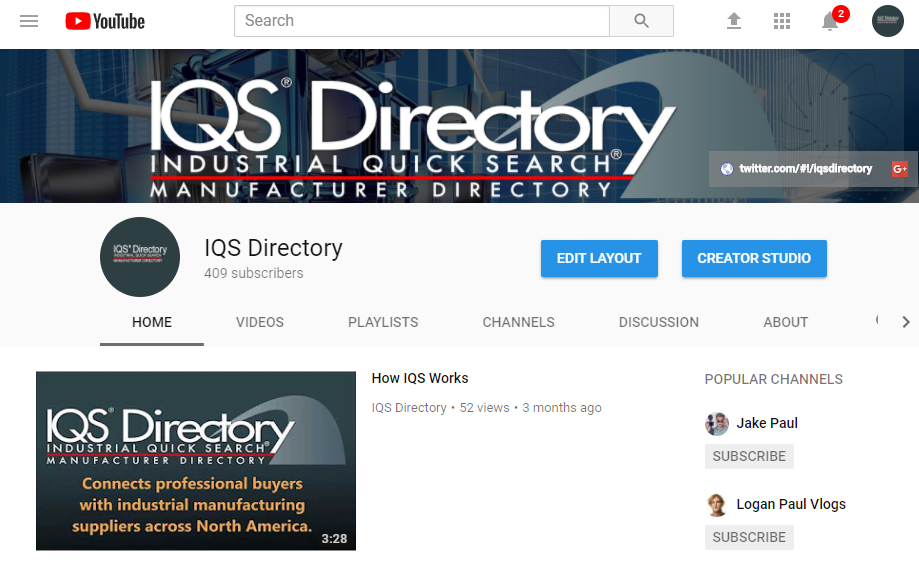 While it may not be surprising to learn YouTube is the second-most popular site in the world, it is also the second most effective social network for manufacturers.

Created by three former PayPal employees, YouTube was sold to Google in 2006 and is currently “the second largest search engine after Google” (The Galvanizing Group).

Ellen Galvin, of The Galvanizing Group, writes “many manufacturers are finding that a single well-optimized YouTube product video can be more informative and engaging than multiple pages of text.”

Although the sheer amount of traffic on YouTube is huge, it’s the ability to put information in an engaging format that really drives results.

A survey by Animoto found “4 times as many consumers would rather watch a video about a product than read about it.”

Videos grab people’s attention. They are more fun and easier to pay attention to than reading paragraphs of text describing a product.

The survey found videos so important that “1 in 4 consumers actually lose interest in a company if it doesn’t have video.”

Not only does having videos help a company, but also not having a YouTube channel can hurt. A manufacturer could be missing out on 25% of potential customers.

Another reason to consider this platform is because “YouTube is one of the most underrated, underutilized social networks by companies today—especially manufacturers” (Weidert Group).

This means there is a relatively small amount of competition among manufacturers for how big of a reach this marketing channel has. Additionally, now is a great time to get your foot in the door before other companies.

Some of the most effective videos manufacturers can produce include: product demonstrations, manufacturing process overviews, and comparisons.

For all these reasons, YouTube is a top-two social media platform for manufacturers.

What about Facebook? It is the most popular social networking site based on the number of active users. Surely it has benefits for manufacturers.

The Weidert Group argues “for manufacturers, however, it [Facebook] certainly doesn’t provide much value as far as lead generation goes.”

Since Facebook is mainly used for personal reasons, finding prospects is like looking for a needle in a haystack.

This is where LinkedIn comes in. Their self-described mission is to “connect the world’s professionals to make them more productive and successful.”

In short, they do a pretty good job at this.

LinkedIn is designed to allow professionals to connect effortlessly, which makes finding prospects easier and more efficient than on Facebook.

Ultimately, there can only be one top social media platform for manufacturers, and that is LinkedIn.

A subsidiary of Microsoft, LinkedIn has over 500 million users, and is “the only major social media outlet that has more users aged 50 to 64 than they do aged 18 to 29” (Weidert Group).

LinkedIn is strictly for business. Posts that may be appropriate for other social media platforms are not always appropriate for LinkedIn. Personal, political, and religious posts are viewed negatively by members. Consequently, posts are focused on professional topics.

LinkedIn is so good at what it does (connecting professionals) that “91% of B2B marketers use the social network and most of them believe in its efficacy” (V2 Marketing Communications).

Companies use LinkedIn because it works. Furthermore, the Weidert Group proposes “no social network provides more value to manufacturers than LinkedIn.”

The platform is especially efficient at generating a high return-on-investment for manufacturers because of the following ways to engage potential customers.

The Weidert Group advocates that actively and consistently sharing useful content on LinkedIn is “the best way to get your company noticed while also positioning yourself as an industry thought leader.”

LinkedIn posts go in front of all sorts of professionals: purchasers, engineers, and executive-level decision makers. Sharing thought-provoking and beneficial content makes a company look knowledgeable, which will make others more likely to purchase from them.

Similarly, personal LinkedIn profiles can be used to build relationships with potential customers and clients. Sharing their company’s posts on their feed or in relevant groups leads to more impressions on people in the manufacturing industry. The Weidert Group writes by doing this “you’ll essentially have a content promotion and customer recruiting army at your disposal!”

Furthermore, LinkedIn has an advertising program that is “great for sending prospects to your landing pages” according to GuavaBox.

The main reason it is so effective goes back to who is on LinkedIn.

LinkedIn states their ads target “a quality audience in a professional context.”

Their targeting is extremely accurate due to the type of information people put in their profiles: industry, employer, location, and job title.

As can be seen, LinkedIn has numerous advantages to other social media platforms for manufacturers

In summary, there are a lot of social media platforms out there and, as a manufacturer, choosing the right ones are important. Facebook, which has a huge number of users, is too unfocused to allow manufacturers to effectively capture leads.

YouTube is an underused social media platform manufacturers can post videos on. Videos are highly-engaging content that are a great change of pace from white papers and blog posts. Additionally, videos attract and convert customers.

Finally, LinkedIn is the undisputed champion of social media platforms for manufacturers. The ability to connect and share content with the largest community of professionals has numerous benefits. Additional features such as groups and targeted ads make LinkedIn even more appealing for manufacturers.

Have more questions about social media or want to learn more about digital marketing for industrial manufacturers? Contact IQS Directory for more information about our marketing services.